First to the finish thanks to FABRI GEAR 220

In 1987 the duo of Roger Baker and Joe Works were looking to start their own business and launched B&W Custom Truck Beds, which fabricated truck beds with specialty racks, toolboxes, and high-quality finishes. Business owners liked the truck beds and good news travels fast so the company grew in popularity.

But Baker and Works recognized the difficulty of putting a hitch for a gooseneck trailer in the middle of a bed. That inconveniently located hitch made it near impossible for the truck owner to use the full area of the truck bed.

Baker and Works saw this problem and came up with a ball that could be pulled out of the bed, turned over, and stored beneath the truck bed, leaving a smooth floor. Additionally, the duo designed the hitch package so that the framework was bolted to the underside of the truck frame. No welding, drilling, or huge cutouts required.

Today that gooseneck hitch design is mimicked by other manufacturers. B&W Trailer Hitches not only continues to manufacture gooseneck hitches and accessories, but B&W also makes fifth-wheel hitches, which rely on a heavy-duty hook-up system similar to a semitrailer, and more familiar receiver or bumper hitches. It also has more than 370,000 square feet of manufacturing space, part of which is dedicated to a growing contract fabricating business. 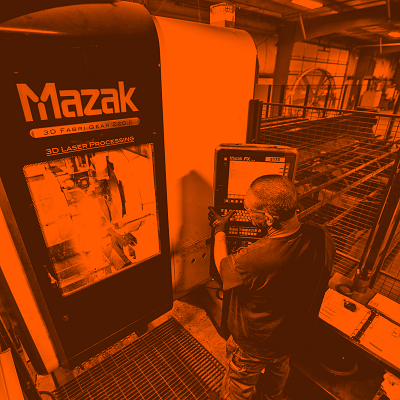 This gives them a demand for the latest manufacturing technology to allow for quick turn around when creating prototypes and other research and development projects. While creating more trailer hitch designs, B&W started to incorporate more tubes. In July 2016 B&W purchased its first 3D laser tube cutting machine. The 4kW 3D FABRI GEAR 220 MK II is now helping the fabricator deliver a new generation of industry-leading hitch designs.

Prior to late 2014, most parts that made up the hitch designs came from machining centers. These metal components needed to meet very high tolerances to fit together perfectly.

That changed when B&W introduced its first complex tube-based hitch design that called for laser cutting at challenging angles, which could result in fit problems if the cuts were not made correctly.

“Another justification was that we just wanted to give the engineers another tool for the toolbox,” Mueller said. “We wanted to give them that capability in our shop to come up with a tube design, get it turned around, and get it out to the marketplace.”

Even before the purchase order was issued for the laser tube cutting machine, Mueller, six engineers, and the salesperson for the contract manufacturing side of the business visited Mazak to take in demonstrations and see what could be done. Mueller said that the crew saw hundreds of samples of laser-cut tube parts. They also got a feel as to how the FABRI GEAR could be used to cut square, rectangular, and triangular shapes and also I- and H-beams, C-channel, and angle iron.

Since the machinery was installed last summer, engineers have been asked to think critically about future hitch designs and their design for manufacturability. “Now it’s a sort of constant state of evaluation,” Mueller said. “You are looking at the parts, and you are thinking if the tube laser is faster and cheaper than other processes and if it helps us to get to the market faster. You have this new million-dollar tool, and you are constantly evaluating how you will use this tool.”

Where the FABRI GEAR 200 recently shined was with the introduction to the new 2017 Aluminum body Ford Super Duty trucks. This is a big deal as the Ford F Series trucks are the top-selling truck models almost every year. In 2016 Ford sold more than 800,000 of these trucks, which is 240,000 more than Chevrolet’s Silverado series.

When that truck hits the marketplace, Mueller said that owners begin to look for aftermarket add-ons to personalize it. That’s why B&W needs its hitches out on the market as soon as possible. The product needs to be available for the early adopters and those familiar with the B&W brand, and early market entry allows online reviews and word-of-mouth to build for the new product, hopefully making the connection with new buyers.

“The trucks were on the market in September, and we were able to have a product designed, built, and out the door very, very quickly because of our ability to make some complex tube parts on the FABRI GEAR,” Mueller said. That entire cycle to design, prototype, test, and roll out to production took about two weeks.

“[The tube laser cutting machine] sped up the process by two weeks to a month,” he added.

B&W is arguably at a disadvantage when compared to its major competitor, which manufactures overseas and sells directly to the major automakers. The competitor works in conjunction with the OEM and develops new hitch products as the new truck is being designed. As a result, its hitch products are available as soon as the truck hits dealers’ lots for the first time.

“Because we manufacture everything domestically, we aren’t waiting for the slow boat from China,” Mueller said. “We already had some advantages in being quick to respond, but the FABRI GEAR just compounded that advantage.”

B&W also does contract manufacturing where they are finding more added value with the FABRI GEAR. The machine has been filing up quickly. Everyday B&W is getting calls for jobs to run on that machine. Mueller estimates that just taking into account the company’s contract manufacturing activities, B&W is one of the largest job shops in Kansas.

These contract jobs are helping to keep the new tube laser cutting machine busy. B&W also has landed a major contract from a large customer that may cause management to consider adding another tube laser down the road. The part that B&W will be making used to be done on machining centers.

Article published in the April issue of The FABRICATOR and Tube and Pipe Magazine.