The potential political impact of President Trump on the fabrication industry

In the recent weeks involving the changes in Washington and transitioning to Republican leadership, there have been 22 executive orders and an array of Presidential Memorandums and Presidential proclamations issued. Some of these orders, memorandums and proclamations include: temporary travel ban, building the wall along US Mexican border, cutting funding to sanctuary cities, rebuilding the US military, reducing regulations for US manufacturing and creating a plan to defeat ISIS.

The new Republican leadership's overarching message is to buy and hire American. The latest movements addressing this are: withdrawing for the Trans-Pacific Partnership (TPP), re-opening the Keystone and Dakota Access pipeline, expediting environmental review for infrastructure projects, and reducing federal regulations for US manufacturing.

But there is a sense of balance with people being optimistic yet cautious. Business, politics, and the economy are interconnected while some decisions affecting others indirectly and possibly creating new problems that were not anticipated. The overall feel is that many business owners believe that these latest political orders will positively impact their companies.

The Trans-Pacific Partnership (TPP) was a trade agreement among the United States and 11 other Pacific Rim nations. This group has a gross domestic product (GDP) of $28 trillion which is roughly 40 percent of the global GDP and one-third of world trade. The plan was to link these nations to create an economic safeguard against China.

The two major goals of the TPP were to have fewer tariffs immediately after the TPP approval and over the following ten years and labor provisions regarding child labor, workers’ rights, and minimum wages. At first the agreement had bipartisan consensus. The benefit of cheaper goods and increased growth outweighed the negative on manufacturing job losses. But recently, the view has shifted and critics are stating that the agreement has depressed wages and has allowed for inadequate protection of currency manipulation.

The thought behind leaving the TPP is that the US will start manufacturing more, instead of off shoring it to other countries at cheaper costs.

But in America we also have a major skills gap which means yes lots of job opportunities and a growing economy but employers are not finding the right people for these jobs. Is this because the bar is set too high? Employers are expecting these employees to not need any job training. They want these workers to come in and be ready to work. But is that the answer, especially with this revived "made in America" push? According to Corporate Executive Board (research group), for every job opening, an average of 30 people apply but less than 20% meet the job qualifications.

With the possibility of new jobs and more money to be made in fabrication but not enough people, automation might be an option to increase productivity. 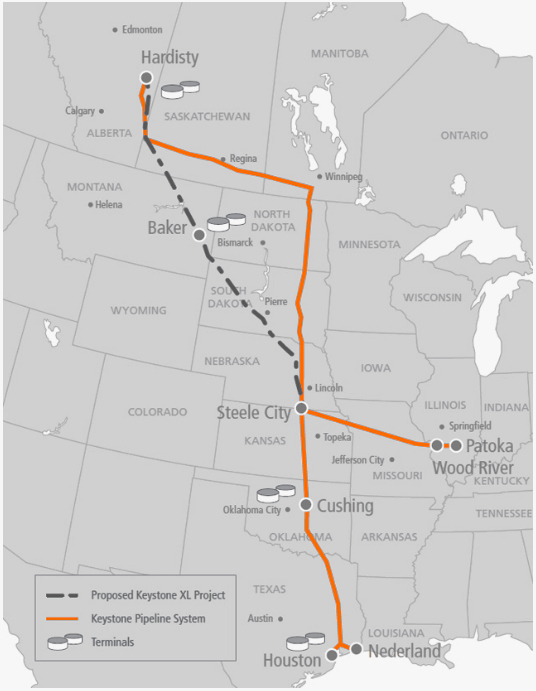 The Dakota Access pipeline is a $3.7 billion project which stretches 1,172 miles through 4 states starting from North Dakota to southern Illinois. The Keystone XL pipeline is an $8 billion proposal to stretch 1,200 miles from Montana to Texas carrying petroleum from Canada’s oil sands to the Gulf Coast.

The Midwest Alliance for Infrastructure Now, states that the pipeline does not cross into the Standing Rock Sioux tribe’s reservation. But on the other side, the Standing Rock Sioux tribe is concerned that the pipeline will affect their area’s drinking water. Native American groups are also protesting that this will disturb sacred burial and archaeological sites. Environmentalists also opposed the pipelines because of the harms it might have on the environment. According to environmentalists, extracting crude oil from oil sands puts roughly 17% more greenhouse gases into the air than standard crude oil extraction. The pipeline’s route also goes across the Ogallala Aquifer which has the risk, if an accident were to occur, to pollute up to 2,500 aquifers.

These pipeline projects are expected to generate $156 million in sales and income taxes and provide $2 billion in economic relief. The pipelines could also add 8,000 to 12,000 construction jobs and 42,000 jobs directly and indirectly. The downside is that the construction jobs would only last roughly two years and would only create 50 permanent jobs of maintaining the pipeline. President Trump has emphasized that all new projects would use American steel. This could be a major win for American metal service centers.

Ed Youdell, President of the Fabricators & Manufacturers Association Intl. (FMA) explains, “In a recent conversation with a prominent Midwest fabricator, he explained the issue of section 201 steel tariffs. These tariffs are meant as deterrent to countries exporting steel to the U.S. below its fair market value. The tariffs also help the US iron and steel producers, which employ 149,000 people as of 2014, against oversupply and low prices”.

With the push for rebuilding infrastructure, this could have the potential to offer fabricators an increase in jobs. but like the abandonment of the TPP, there is a skills gap. With this push, there could be an increase in many manufacturing and fabrication jobs but there might not be enough man power to execute them. This again, points to the possibility of an increase in automation.

Reducing federal regulations of US manufacturing

Deregulation has pros and cons. The plus side is that deregulation allows for more innovation for small companies, allows free market to set prices, and large businesses can become monopolies because they can control regulatory agencies. The downside is that it allows asset bubbles which can create recessions, prevents huge industries from getting started, possible fraud and overly risky behaviors just to create higher profit gains. Last but not least, another potential negative are social concerns for the environment.

If this is true and it does benefit small businesses, this could be huge for the fabrication industry. Job shops are a major part of the industry. Job shops are usually much smaller with roughly 20 or less employees. This will allow for these smaller companies to redirect their money and effort towards improving their company instead of worrying about regulatory rules.

Ed Youdell, President of the FMA explains the current optimism in the fabrication industry, “The recent board meeting of the Fabricator's and Manufacturers Association, International reinforced that our metal fabricator members have become increasingly busy post-election. The election brought clarity to their customers and that clarity is resulting in renewed commitments to projects and increased project quoting. The board of FMA is made up of many different types of members that represent the entire supply chain from OEM through providers of machine tools and consumables. As a group they are very optimistic that 2017 will be a strong year for their individual companies and our industry”.