At times, it is easy for customers to assume that the individual on the other end of the phone may not understand their concerns. But at Mazak, there are many engineers who completely understand the situation customers are going through when they need help with their laser. Tyler Van Wyhe is a perfect example of this. Before coming to Mazak, Tyler worked as an operator and programmer at a major fabricator in the agriculture industry. Going from a shop to the machine tool builder, Tyler understands both sides of customer support. Having this firsthand knowledge on how customers operate makes him an invaluable member of Mazak's applications department. Tyler has developed a niche for tube laser-cutting with over 15 years of experience.

Tim Tapper, Applications Manager at Mazak Optonics stated, “Tyler has been a part of our Applications group for 13 years, so he has experience with most of our laser models. But when it comes to cutting tubing, he is one of the foremost experts in our industry. If you own a FABRI GEAR laser machine, chances are you have Tyler on speed-dial.”

Read more to learn about Tyler and his role at Mazak through this quick Q&A session.

What is your background involving laser technology and the fabrication industry?

“After high school, I really wasn’t sure what I wanted to do. The summer after graduating I found a two-year course for laser electro-optics at Southeast Technical Institute (STI) in Sioux Falls, South Dakota. After finishing my degree at STI, I started working for Kooima Company, one of Mazak’s customers. They had some of the very first FABRI GEAR tube lasers. That’s how I got started in the industry, I was putting tubes in the machine and stacking parts off it. I was hired to run those machines, which is how I fell into my specialty of tube and 3D laser-cutting right off the bat. While working for Kooima Company, I started to learn programming too. Later, I was asked to help open a new Kooima satellite shop. It was only me and one other guy that knew how to run the tube laser, and that was the first machine they were going to put in this satellite shop. From there I was operating and programming the Mazak FABRI GEAR laser machine for three years before finding my way to Mazak itself.”

What is your current role at Mazak?

“I’m an Applications Engineer and have been since December of 2006. I started and have been in applications really my whole career. As time has progressed, I’ve certainly learned some of the service aspects as well as different machines other than tube lasers. Before Mazak I was only working with 3D lasers, which made the transition of also working with 2D lasers pretty simple. I help management by working with our customers to schedule jobs and drafting quotes for the applications department. I work to help the department stay organized and help everyone on the road whether they need parts or advice.”

“My daily responsibilities are a total mixed bag. It changes not only every day, but every hour. You never know what you’ll be getting asked to do next to help other engineers or a customer. My day ranges from a variety of tasks. I will spend time answering any operational questions for the end users of our lasers. I also help with the training classes, especially if they are learning to use one of our 3D laser-cutting machines. Other times are spent working on the laser machines doing testing, feasibility cuts, and programming."

What is your definition of great customer service?

“Customers will always remember timeliness the most. Doing your best to get the customer what they need, and when they need it, is crucial. Getting back to a customer with a solution quickly will reduce their downtime, leaving them more satisfied. Knowing who to give the customer support call to is important so that the engineer can have a solution for the customer as timely as possible.”

“Sometimes getting the answer is a challenge in the technical world that we live in. Plus, at Mazak Optonics, we have a vast array of laser-cutting machines. We all have our niche because of this. There isn’t one person that knows everything because it’s impossible to have one person know the answer to everything for each machine. But if you don’t know something it’s important to stay in the loop so you are still able to learn for the future.”

What are your hobbies and interests?

“I have similar hobbies to work, I like to build and make things. When I was a kid on our family farm, we built most of our buildings ourselves. Learning how things work and then creating something new or improving something has always interested me. I’m a big ‘form and function’ guy.”

“Because I like to build things, I enjoy making showpieces for our FABTECH shows and parts for customer displays. It is great showing how our laser technology can improve a part or product for our customers in a way they may have never thought of before.”

“Outside of work, I also enjoy woodworking at home. I currently plan on making some outdoor Christmas decorations and a new patio table to have it ready for spring. Since I work with metal during the day, I like to incorporate metal into my wood projects as well." 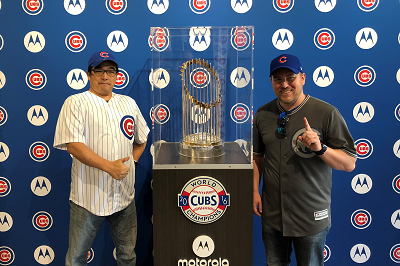 “I’m also a big fan of country music in general, but specifically Eric Church. I have now been to four of his concerts and I’m always looking to go to more. His concerts are great because he will not only sing his songs, but he also sings really whatever songs he wants to sing for a three to four-hour show. No openers either. It’s one of the best concerts to experience.”

"I enjoy a lot of sports. Growing up in the Midwest my loyalties are kind of split between Minnesota and Chicago. I’m a big Vikings, Twins, Cubs, Bulls, and Blackhawks fan. Being on the road a lot for work, at times, I have to miss things I otherwise wouldn’t. For game 7 of the 2016 World Series I was in Denver, CO. However, even being on the road I was able to find fellow Cubs fans at Wrigley’s Chicago Bar & Grill in Golden, CO. It was one of the best times I’ve ever had surrounded by strangers. The place was absolutely packed hours before the game even started. I, along with many others, stood outside for most of the night on the outdoor deck watching the game. It was a little chilly out, but we were all in it together! What a game!"

Which would you pick: being world-class attractive, a genius or famous for doing something great and why?

“I would pick being a genius – no doubt. I’m a big fan of Marvel movies. My favorite is Iron Man’s character, Tony Stark. He is such an incredible genius. He is not only able to come up with solutions to problems, but to discover problems people didn’t know they had in the first place. To be that smart would be amazing. And with being a genius, fame would eventually come."

Meet More of the Team