Demco, a family-owned business in its third generation, has roots going back to 1950. The family has witnessed many advancements over the years and recently, they’ve jumped from CO2 to fiber lasers, and the benefits have been exceptional.

Located in the small town of Boyden in Northwest Iowa, the company strives to provide the most reliable, safest and performance-driven products in agriculture, semi-trailers, RV towing and trailer components. Kevin Ten Haken, executive vice president at Demco, said getting to third generation operating status is not an easy achievement.

“There is a tendency with family-owned companies where the first generation makes the business their passion, and then the second generation can buy in, but often, it doesn’t work,” Ten Haken says. “And by the third generation, the company is likely to not be sustained. We are breaking the mold. We are the exception to the rule.”

Operating in a vertically integrated manufacturing environment, Ten Haken says they do everything from cutting and bending to machining and welding, and they also utilize liquid and powder paint systems for all their products.

The company got its start in 1950 producing fertilizer application equipment. By the early 1980s, Demco was manufacturing sprayers, fuel tanks, fertilizer attachments and pumps. But when the farm crisis hit, the family knew it was time to diversify. 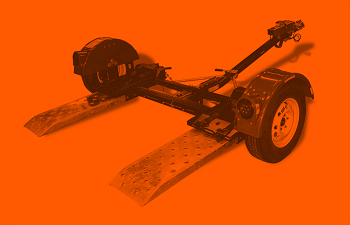 “It was a local farmer that came with an idea,” Ten Haken says. “The idea was a two-wheel trailer used for towing vehicles, which was called the KarKaddy. It was good because the agriculture industry was a train wreck. It was a life saver to the company.”

Ten Haken says the focus for Demco is diversification, especially given that the agriculture industry is often counter cyclical to the economy. Not only does Demco manufacture its own products through research and development, but they also expand operations through acquisitions.

A good example of Demco’s commitment to diversification took place in 2000 when the company purchased Maurer Mfg. in Spencer, Iowa. The company manufactured semitrailers, combine extensions and combine trailers. And then, in 2017, Demco purchased Circle R, which is a side dump line of trailers. In 2018, Demco purchased SMI, a company that manufactured supplemental towing and rigging systems for cars. Now, Demco’s products range from agriculture, to semi-trailers, to RV towing to trailer components.

“We have diversified into trailer products as a contract manufacturer in towing,” Ten Haken says. “We are the manufacturer behind the Penske and Budget trailers.”

Ten Haken says the first Mazak units had a 20-year life cycle with well over 100,000 hours. The company never had to replace a resonator in the machines.

“We don’t run the machines past their intended speed and throughput,” Ten Haken says. “We also did regular maintenance to get that much life out of them.”

When they decided to advance the laser-cutting department, the main goal was to increase throughput. Ten Haken says he and his team knew fiber laser technology could help them reach their higher throughput goals. At the time, Demco was cutting two shifts and loading up on the weekends.

“When Monday morning came,” Ten Haken begins, “there was a lot to offload and we had to separate parts and feed them to the press brakes. We felt it was better to get the throughput to cut as much as possible during the first shift throughout the course of the week instead of utilizing slower machines with limited throughput.”

The Need for Power

Demco uses metal that ranges from 14-gauge up to 5/8-in. and 3/4-in. plate. But the bulk of the work is on 7-gauge and 1/4-in. plate. They realized higher wattage fiber lasers could reach faster cutting speeds and put them in a position to reach their throughput goals.

With higher power lasers, not only is there increased throughput, but it also allows for an increased cutting range through the use of nitrogen as an assist gas, which is something Ten Haken wanted to capitalize on.

“Cutting with nitrogen on the small gauges allows us to minimize an oxide layer on the cut parts,” he says. “Using nitrogen allows us to skip a step; we don’t have to remove the oxide layer in preparation for painting.”

Although the company was a long-time Mazak user, Ten Haken felt it was important to do their due diligence researching other brands. Ten Haken says he looked at Mazak and a competitor that was supported by a local dealer. A price comparison showed that initially, the cost would be lower with the competitor.

“But we weren’t satisfied with it,” Ten Haken says. “The service support wasn’t going to be as great, and the chassis wasn’t as robust and heavy as the Mazak machine. Another big factor for us was the 20-year track record we had with Mazak; we knew what to expect and we did not want to discount that.”

“The two machines being the same and located next two each other meant the same cut conditions, same parameters, same repairs and smaller learning curve,” Ten Haken says.

The decision to implement an automation solution dealt more complexities than the decision to upgrade machines. Ten Haken says he knew automation wasn’t a one-size-fits-all solution, which ultimately led them to a custom laser automation system, an MST 3015 Reverse Flow with a 6-shelf tower and over/under unload carts.

“We had a challenge with the automation layout,” Ten Haken explains. “Originally, we wanted the system to go into the existing space where the previous automation was. But, it’s hard to stop production, remove the existing system, put in the new system and then start running again. Instead, we found a new location, which required some remodeling.”

Mazak’s M-Series of automation is a flexible thanks to a wide variety of peripheral devices and functions that expand the range of applications, including conveyors, over/under carts and labelers. M-Series systems feature a small footprint and highly customizable configurations. Over/under carts are available in 3,000 kg and 5,000 kg capacities and enable the operator to access a hot job immediately after the laser-cut as well as the ability to stack cut sheets in unattended operation.

With a plan to continue manufacturing operations, Demco was able to adjust. Ten Haken says the automation height forced the placement to be in an adjacent room with a wall removed. The lasers were placed in a room with a lower ceiling height. Despite being in different rooms, the location worked out as the automation loading area is closer to the where the sheet metal is offloaded.

Ten Haken says the over/under unload cart arrangement created a buffer because previously, operators dropped processed parts on a scissor lift. Now, they can shuttle through the offload, pulling parts off secondarily. The over/under unload carts allow for finished parts to be easily accessed, taken to the laser and then moved to the next step downstream.

Since implementing the two Optiplex 8-kW fiber lasers and the MST automation solution, Demco has experienced a variety of operational improvements.

“Speed of throughput is evident,” Ten Haken says, “Compared to 2.5kW and 4kW CO2 lasers, even compared to a 4kW fiber laser, an 8kW fiber laser offers a dramatic increase in cutting speed.”

Ten Haken says the cutting speed is most impactful in mid-range material using air or nitrogen, specifically 1/8-in. to 1/2-in. Another major improvement with the 8kW laser is faster piercing times, which contributes to overall faster nest cycle times.

“The volume we cut on our second shift has greatly diminished,” Ten Haken says. “We now have no cutting after hours or on the weekend. We went from three machines to two, and it has been substantially greater throughput. We have capacity to handle the increases in production in the future.”

The offloading process has also improved, and Demco has reduced operational hours. Another improvement is that with a higher power fiber laser, the part edge quality is visibly smoother and cleaner.

Because high power lasers allow for faster cut speeds in mid-range material, increased cut range and improved part quality, the machines are ideal for high-volume OEM applications and performance job shops. This is something Demco has witnessed firsthand.

For Demco, switching from CO2 to fiber lasers also came with energy savings and reduced consumables. The dual high-power fiber lasers and custom automation system improved Demco’s operations in multiple ways, most specifically in that it saves time and money. Furthermore, Ten Haken says there is enough automation baked into the laser, “it lends itself to not need to be babysat or tweaked manually.”

Ten Haken says with the previous CO2 lasers, tweaking the cut conditions created more variability, but with the new technology, the company has realized improved consistency in cut quality.

Another aspect of improvement Demco has witnessed with the fiber lasers compared to CO2 lasers is the overall expectation and requirements to maintain them for the future. Ten Haken says it took much more expertise to maintain and operate the prior machines.

Article published in the November/December issue of Shop Floor Lasers.