One of Inc. Magazine's fastest-growing companies is based out of Vidalia, Louisiana owned by a brother duo called Southern Designs and Gifts. Tance Hughes, founder and CEO, and his brother partner Seth Hughes, who runs production, are a duet who manufacture home décor which could already be hanging in your home.

Tance Hughes, a member of Forbes' 30 Under 30 honoring standout manufacturing entrepreneurs, founded the company in 2008 with just five employees. Then in 2013 the company began making wall art with four CNC plasma tables. The four plasma machines were running 24 hours a day but just couldn’t keep up. “Volume was the main reason we started looking for a laser,” said Tance, “We knew we wanted a laser due to the laser’s output, faster cutting speeds, improved cut quality and versatility.”

The first time around, Southern Designs purchased a laser but didn’t have great success with the manufacturer. So they decided to do their due diligence and attended FABTECH. This time the Hughes did much more extensive research. After working with their salesman from Capital Machinery, they decided to go with the Mazak OPTIPLEX NEXUS FIBER 6kW laser-cutting machine. 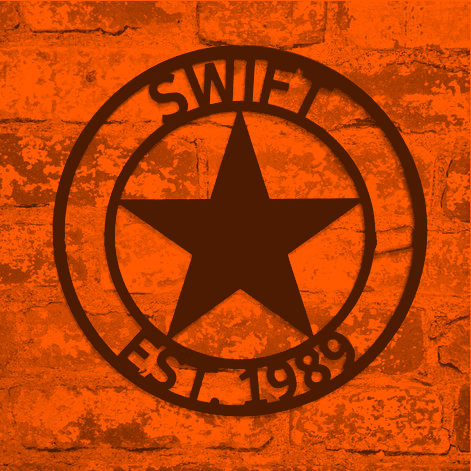 “At first, I wasn't sure we would be able to tackle such a large purchase, but once we saw its speed and quality, I knew we had to do it. We decided on the company itself. We wanted a laser manufacturer who has great customer and tech support and who will stand behind their machine,” said Tance.

Southern Design was debating between a 4kW and 6kW but decided to go with the 6kW. They wanted the faster speed for their own products but also for when they decide to diversify into contract manufacturing.

“We really liked the CNC control and the interface. It was easy to use and there was more data that showed what is currently being processed on the machine. We also like the material handling, workpiece lifters, the overall robust machine construction and high quality. The workpiece lifters make it easy to position material while the shuttle table allows for easy in/out of material and cut pieces. While one sheet is being processed, finished parts are pulled off,” explained Tance Hughes.

A couple other aspects they found helpful were the auto nozzle changing and the auto retry feature. If there is a tip-up, instead of the operator manually needing to press the button to retry the part, the OPTIPLEX NEXUS FIBER has an auto retry which will automatically attempt the part again.

This laser is more efficient than their previous laser solution with the enhanced features, user friendliness and many automated processes making the operator less involved. Tance explains, “There is much less down time, the machine is more reliable and we get more products out the door faster.” Southern Designs now has 35 employees who design, produce and ship 700 to 1,000 pieces daily.

There were a hiccup or two along the way but were easily overcome. The 37 by 27 foot machine is designed for installation flexibility according to David Widlund, regional sales manager at Mazak. "When we had to move the chiller on the machine due to Southern Design's space constraints and its building design, this wasn't a problem because of our plug-and-play versatility, Widlund said. "The periphery equipment all have extended cables so they they can be moved as far as 15 feet to accommodate building requirements. These items can be extended even further away if need be by purchasing extended cables."

Overall, since implementing the two lasers, the 4 plasma machines are completely gone. Southern Design has given one to a local school and is selling the others. Compared to their other laser, the OPTIPLEX NEXUS FIBER 6kW is saving Southern Design time and money with higher throughput. “The machine is about 15 to 20 percent more efficient than the other laser. We have enjoyed the Mazak laser and the support we have received. If we get to the point where we are ready to purchase a third laser, we are going straight back to Mazak. We want someone we can trust. Our company depends on that,” said Tance.

"With Southern Design's volume continuing to rise, it's likely that so will its equipment needs, said Tance. "We are considering adding a third laser in 2019."

Article published in the March issue of MetalForming. 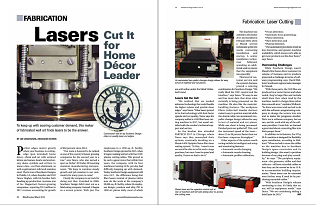