As wearable technology continues to evolve and rise in demand, the Mazak SMART Glasses have also advanced.

Smartwatches, activity trackers, and smart glasses. Wearable devices are continuing to grow in popularity and advance their capabilities. Wearable technology is still relatively new, but it has grown tremendously. In 2016, there was a total of 50.4 million smartwatches sold. Now, in 2020 wearable technology is expected to sell 411 million smart devices totaling $34 billion.

The upgraded Mazak SMART Glasses overall have a new look and are now more stable, robust and user-friendly. The new style allows them to be worn with a hard hat, bump cap and safety glasses. The new glasses act as a rugged wearable tablet that is water-resistant, dust-tight, and shock and drop resistant up to 2 meters.

While there are many new benefits, the top three improves include:

Learn about how these three improvements allow for enhanced communication and support for your laser-cutting machine.

The previous Mazak SMART Glasses solution offered a 1-way video, but the latest version now offers a 2-way video through an augmented reality headset that serves as a dashboard. The arm that shows the screen is adjustable to best fit all users. It can be adjusted to be worn on the left or right side depending on the user’s eye dominance.

The ability to have 2-way video allows for the laser operator who is using the SMART Glasses to view a photo or video that the Mazak service technician sends over which is visible through the screen.

The SMART Glasses’ camera is powerful with the ability to take 16-megapixel photographs and 1080p videos. The camera can be pivoted up and down 30 degrees in either direction giving the ability to capture hard to view angles.

The 1080p video lets an operator record a video from the Mazak SMART Glasses as a procedure for other laser operators to use as a how-to video to reference later. The new glasses can store memory, up to a 512 GB SD card, allowing you to watch these saved video procedures.

Having the ability to store and recall videos and photos to view at another time is a great way for new laser operators to use the experience of more advanced operators without them being present. 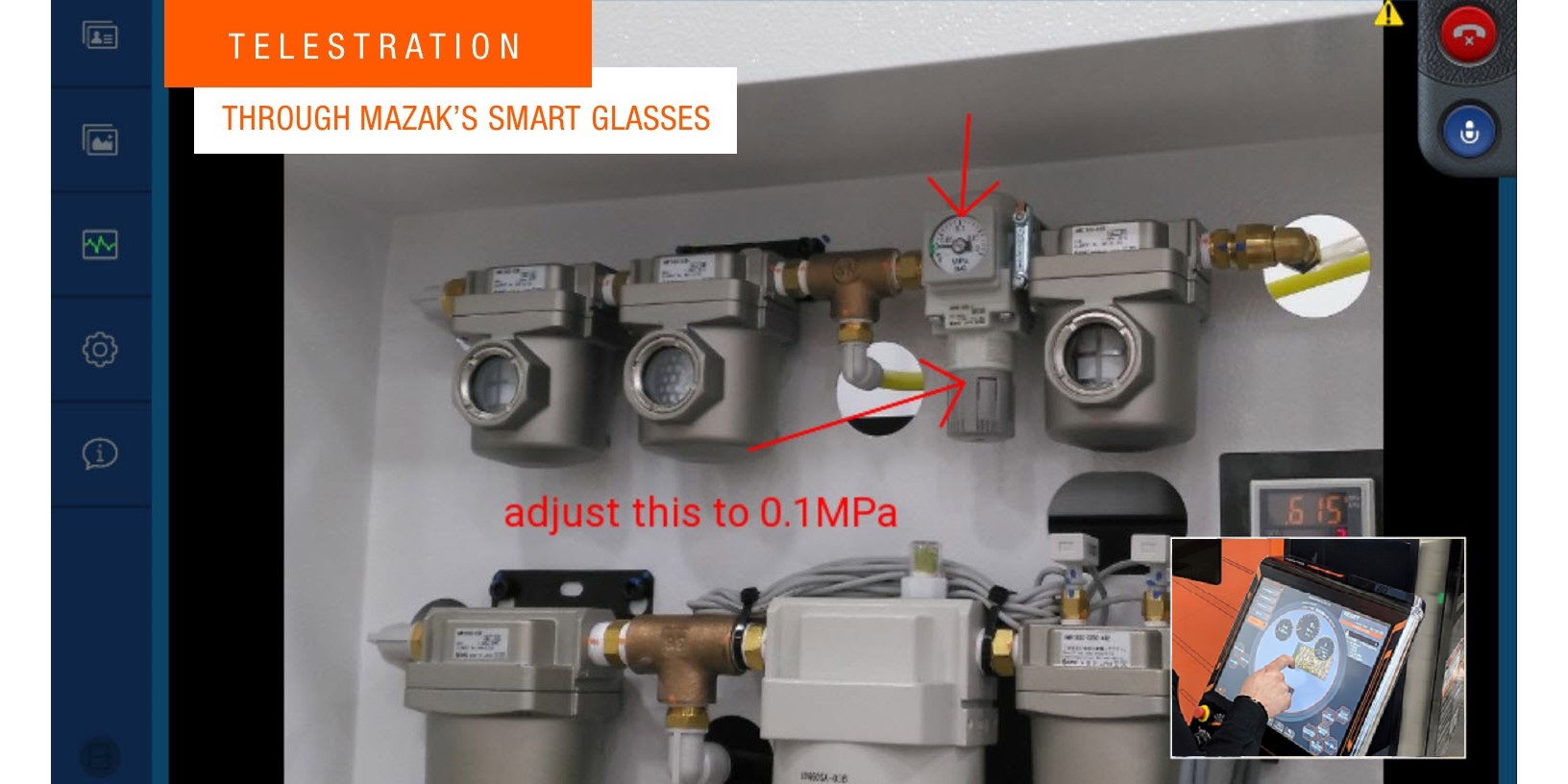 Taking 2-way visuals to the next level is image sharing and telestration. As mentioned previously, Mazak support technicians can take a photo from the SMART Glasses user’s view. To go a step further, with telestration there is the ability to use these photos and then draw or notate on the image to indicate and give a more visual communication to the laser operator for further explanation on what to do.

This functionality is great when support has directed you to the correct location, but you are just not finding that switch, test point, marketing, etc. that is needed to proceed with adjusting the machine.

The new Mazak SMART Glasses are fully handsfree navigated by voice control and head movement. This allows glasses users the freedom to operate equipment as needed without using their hands for glasses functionality.

The Mazak SMART Glasses have advanced microphones for speech recognition and noise isolation. Four digital microphones filter out background noise. One is located on the display pod as the primary mic and is downward-facing close to the user’s mouth. The reference microphone is upward facing to pick up and remove background noise. If the fabrication shop is loud, the SMART Glasses are still able to understand a user’s voice commands while also working to cancel out ambient noise for users who are helping the operator.

There is a 91-decibel loudspeaker that sits above the ear when worn on either side. But if the ambient noise is too loud for the SMART Glasses users, there is a headphone jack on the glasses, and the glasses are also Bluetooth compatible.

If these improvements alone haven’t sold you on the new Mazak SMART Glasses, the reduced onsite service cost savings will.

The communication improvement of being able to see exactly what the operator sees not only helps the service technician understand the problem, but it can also help decrease downtime by providing a solution to the issue quicker. Having a full scope view of the problem through the eyes of the laser operator allows for a better understanding of the situation which means getting the solution faster.

For more information on the latest updates on the Mazak SMART Glasses or to get your own set, please contact Mike Henson at mhenson@mazaklaser.com.