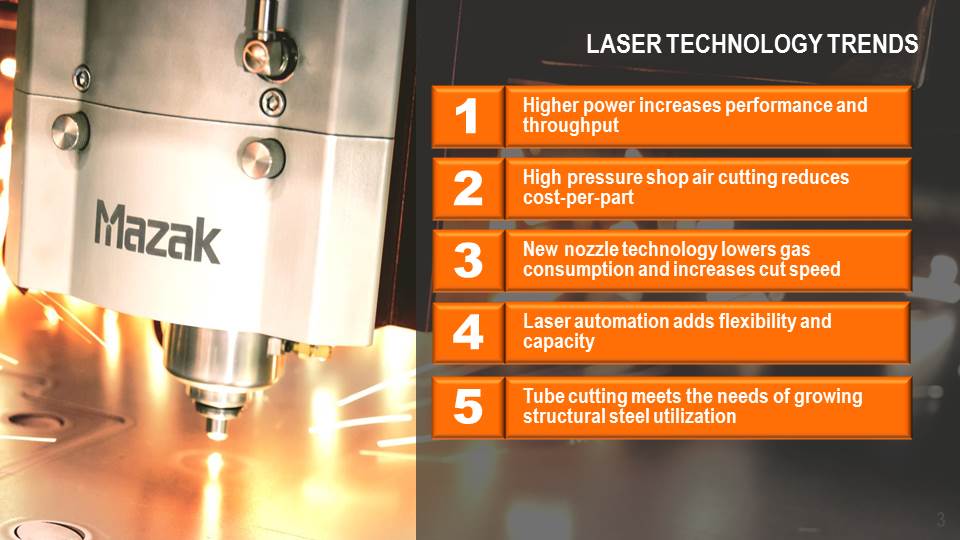 A common assumption is that high power means cutting thicker material, which is true. But having a larger cutting range is just one aspect of the advantage of high power laser-cutting; it is also the faster cut speeds which increases throughput. For example, the left side of the photo below shows a cutting speed for a single part of ¼” mild steel. A 10kW fiber laser is cutting 333% faster than a 4kW fiber laser for this single part.

While this is impressive, a more relatable reference is running a full nest to show the true overall improvement. Nest times include piercing, fine power ramping on corners, and additional movements that affect the overall cut time of a full sheet. The right side of the photo shows a full 5’ x 10’ nest of ¼” mild steel using 4kW, 6kW, 8kW, and 10kW power levels. This particular nest took almost an hour, 57 minutes and 37 seconds, to cut with the 4kW laser. For the same exact nest, the 10kW’s cutting time was only 26 minutes and 36 seconds. With the 10kW you can cut an additional full sheet in the same amount of time it takes for a 4kW to run the full nest.

Improving edge quality has been a focus since the introduction of fiber lasers. Since CO2 laser machines offer a fantastic edge quality, solid-state laser technology has been striving to achieve the same. As you progress to higher power levels with fiber lasers, the edge quality is visibly smoother and cleaner, more now similar to a CO2 laser. 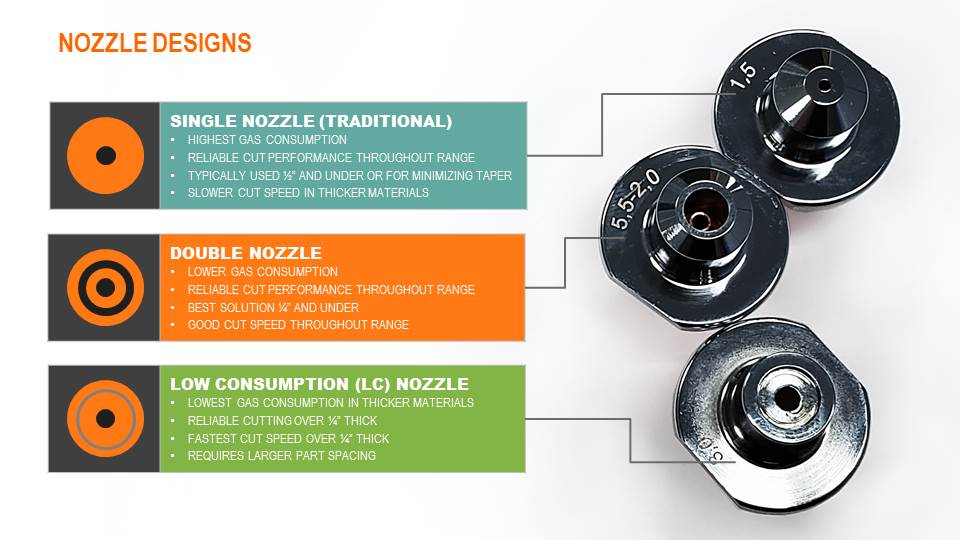 Single nozzles, also known as traditional nozzles, offer reliable cut performance throughout the cutting range, but is typically used for ½” and under or for minimal taper. While this is a reliable nozzle choice it does mean slightly slower cutting speeds in thicker materials and has the highest gas consumption rate of these three designs.

If your company does ¼” material and thicker, LC nozzles provide the fastest and most reliable cut speed. The LC nozzles also have the lowest gas consumption for thicker materials. But something worth noting is that LC nozzles do require larger part spacing due to the nozzle width. It is important to have your parts spaced out appropriately so that the nozzle does not interfere with previously cut parts.

Each nozzle design fits best for specific cutting applications. Depending on the material thickness you process, each of these nozzles will provide a different advantage.

Traditionally, air systems started by utilizing the 150 psi compressor in the back of a shop. With this limited pressure, capacity was reduced to cutting 1/8” and under. With the momentum behind using air, there are now high-pressure systems with 400 to 500 psi which is often equal to the pressure of a nitrogen bulk tank. These high-pressure air systems draw in air from the environment it is in and compresses it to build pressure.

High pressure compressed air is especially great for aluminum cutting. You can cut other materials, such as stainless steel, but there may be a tarnish or gray to the cut edge of the part. Air cutting mild steel also has a slightly less smooth edge quality, but this is all dependent on your edge quality acceptance.

If your application allows for shop air, there are fantastic savings possible by using it. As shown below is a cost comparison for cutting a nest 3/16” mild still utilizing air and nitrogen. As for this example, there are savings as much as 80% cost-per-part by using shop air.

With the skills gap widening, baby boomers retiring, limited skilled workers, and a growing apprehension over workers welfare and health, the fabrication and manufacturing industry are searching for answers to increase productivity.

Approximately 10,000 people per day are turning 65 in America and it will continue until 2030. This phenomenon is the biggest percentage increase in the over-60 age group that America has ever seen. Now the challenge is the loss of skills from one generation to the next. These are learned over years and it is difficult to transition to someone in only a few weeks.

Another concern is worker's welfare. According to John Schumacher, Senior Vice President at Assurance, “jobs that are more physical in nature may create an increased potential for injury. Statistically, older employees gave fewer workers’ compensation injuries on the job. However, those injuries tend to be more severe and the recovery time is longer. The CDC and BLS indicate that workers 55 and older experiencing a lost time injury have an average of 12 lost work days which is almost twice the amount of workers aged 20-24.”

Placing raw material onto the pallet changer, shaking parts, removing skeletons and sorting parts can be extremely strenuous on workers. Just by having a load-unload system (LUL) it can greatly reduce the physicality of your laser operator’s tasks.

Technology is an ideal way to battle the war on top talent and reduce the physicality of the sheet metal industry. Automating jobs, no doubt, increase efficiencies. It’s time to embrace the future and begin the transition to a more automated workforce and work environment. For laser cutting, there are three major categories of material handling automation systems: a standalone machine with shuttle table, laser machine with a load-unload (LUL) and a laser machine with a flexible manufacturing system (FMS).

Mazak’s standard configuration for 2D laser machines is a standalone machine with a shuttle table. This allows fabricators the ability to run one shift with an operator. The beam on-time is about 52 percent which means the machine is running a little over four hours but the machine is idle for almost four hours. Even though you are at running roughly half the time, can you imagine if you didn’t have a shuttle table?

Upgrading to a LUL gives fabricators the ability to run two shifts but only requiring one of those shifts to be manned. The second shift can be unmanned giving you lights off operation ability. With a LUL, the machine is running at 75 percent beam on-time about 12 hours per day. This automation solution is providing almost two times the amount of throughput compared to a standalone machine with a shuttle table.

If your company processes many different types and thicknesses of material, an FMS is the most productive automation to upgrade to. This solution offers a LUL with a tower that allows you to store the multiple materials you process. The FMS, like the LUL, offers two shifts with one being manned and one being unmanned, but the beam on-time is at 92 percent, giving you almost 15 hours per day of laser processing. FMS systems give two and a half times the amount of throughput as compared to a standalone machine.

There many additional components that you can add on to your automation systems such as carts, conveyors, multiple towers, scissor tables, and labelers. Depending on your needs, Mazak’s automation can be customized.

Automation allows fabricators to increase throughput without adding machines or adding more headcount. Partnering with a builder that offers a complete solution that fits your individual needs is most important. Mazak takes a partnership approach to automation so you can be as efficient and productive as possible.

In spite of tariffs, the utilization of structural steel is projected to grow at 5.3% CAGR (Compound Annual Growth Rate) from 2018 through 2023. With the current US government pushing for improved infrastructure, structural tubes and pipes have seen an increase. Structural steel has also become increasingly more popular for the growing range of applications, including residential and non-residential construction. Because of advanced technology, buildings can go vertical much faster by using tubes and pipes. While getting building up as fast as possible is important, tube and pipe is also a preferred option because it is more environmentally friendly. Metals are recycled at a rate of 90% making them more “green” compared to other structural materials.

Why is it essential to cut tubes and pipes with a laser? Because of the faster cutting speeds, high precision cutting, and increase efficiencies of fabricating downstream a laser is the ideal solution for tube, pipe and structural material cutting. Mazak’s 3D laser-cutting machines offer high precision six-axis technology and a four chuck design that handles longer, thicker and heavier materials, along with breakthrough direct diode laser technology and cutting performance.

Precision 3D cutting reduces the time for downstream processes such as bending, welding, assembly, etc. This is because of the way the 3D cutting head functions, allowing for 3D geometry from beveled and mitered end cuts to countersink holes. 2D makes a hole towards the center, whereas 3D can make the hole vertically. This high precision six-axis technology can cut any desired angle for weld prep, plus achieve the highest accuracy for easy fit-up assemblies.

The four-chuck design is ideal for processing structural materials such as I beam, H beam, angle iron, c channel, HSS, along with other user-defined materials. Common with structural materials are the inconsistent shapes such as bowing, twisting or misshaping which makes the four-chuck system vital. Keeping full control of the materials helps with inconsistencies. Self-centering of the opening and closing of the chucked tube supports to keep the material in line and machine functions to find the center of the material before cutting, this helps to make very precise parts.

The smaller beam diameter also creates a reduced heat-affected zone, in part because the DDL beam is a 10th the size of a CO2 beam and because it is cutting speeds are faster. Both of these beam characteristics result in less heat needed to cut the material and less time that the edge of the material is being touched by the laser’s extreme heat.

The future is bright for laser-cutting. With laser technology being fairly young to the fabrication industry, advancements persist year-after-year. Laser power has continued to be important for cutting speed, improved edge quality and increased cutting range. Automation cycle times are getting faster to keep up with a laser's cutting speed while also offering the ability to expand in the future. By implementing these five laser-cutting technology trends, it can improve your fabrication operations one part at a time.

Register here for the Capital NASCAR Hall of Fame Seminar in Charlotte, North Carolina to learn more about these five trends and advanced laser-cutting technology.